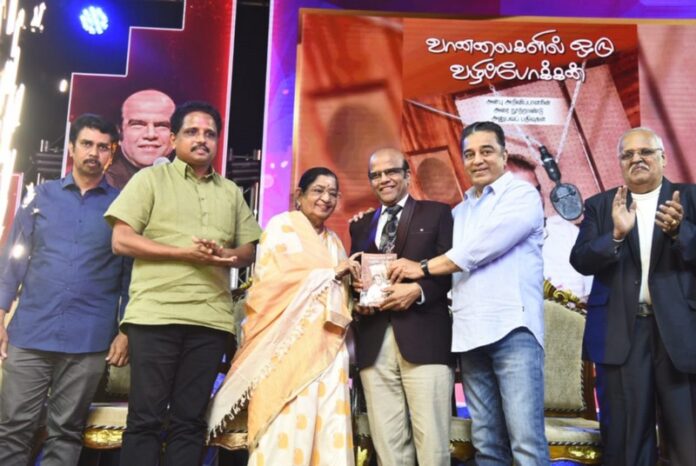 (Memories of a Broadcaster)

Vigneshkanth of Blacksheep compered the event.

A medley of songs, mostly from Kamal’ s films were performed live.

In his address, Kamal Haasan mentioned about Abdul Hameed ‘ s purity and perfection in pronouncing Tamil.  He also recollected his association with Abdul Hameed since long.

While speaking, P. Susheela expressed her surprise about a Broadcaster being appreciated & applauded by so many stalwarts!

She praised Abdul Hameed ‘ s diction in Tamil mentioning that she too being a Telugu native, sang Tamil songs properly and perfectly.

In his thanks giving speech, Abdul Hameed gave an emotional account of his journey as a Broadcaster, actor and other avatars!

He made a special mention about the pitch- perfect and faultless rendering of T. M. Soundarrajan and P. Susheela. He also mentioned about his connectivity with Kamal Haasan during the making of Thenali in which Kamal spoke dialogue with a Ceylon accent!

He profusely thanked the organisers, sponsorers and publishers besides all others who were involved with the event, from the bottom of his heart!