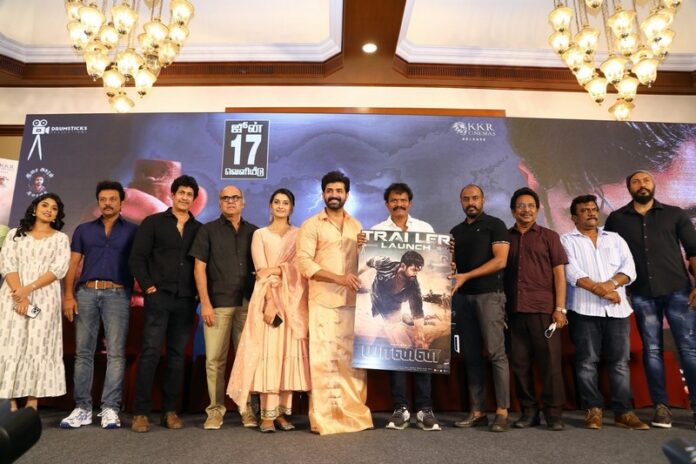 Filmmaker Hari, the emperor of commercial blockbuster hits, and Arun Vijay, a successful actor in the Tamil industry are collaborating on the movie ‘Yaanai’. With the complete works of this movie finished and all set for the worldwide theatrical release on June 17th Worldwide.

Yaanai Movie cast and crew interacted with the press and media sharing their experience with this project.

“Both I and Arun Vijay wanted to work for years, and it’s finally happening with the movie ‘Yaanai’. Producer Vedikkaranpatti S. Sakthivel sir alone is the main reason behind bringing us together. This is a big-budgeted grandeur movie. It is a movie with an emotional story. A person, who has ritually embraced patience and silence all throughout his life suddenly breaks out in anger forms the crux of this story. The past 3 years have taught me a lot of lessons. I wanted to make this movie in a different pattern. I learned a lot from filmmakers from various industries and then started working on this project. I am collaborating with GV Prakash after Seval. Every actor in this movie gave complete support towards this movie. There were lots of risky shots in this movie, and it could be accomplished only with the support of the entire team. Everyone has worked with complete involvement and dedication.

I have followed the pattern that I created in my erstwhile movies like Thamirabharani and Ayya. Samuthirakani sir has worked like an assistant director in this movie. It was a great help for me, and I owe a lot to him. The movie will be more like the ones that were made during my early stages of directorial journey. I thank everyone for the great support towards this movie.”

“I and Hari sir have wanted to work together for a very long time. Such a grandeur movie with top league technicians demanded for a great producer. It’s a great bliss to get Sakthi sir, and we thank him for this gesture. It really needs a great confidence to create such a movie. I play the character of a person, who has vowed to protect everyone around him. Performing this character had its own challenges, and I have performed a village-bound role after a long time. Director Hari sir has been a great support and pillar in shaping my character. The action scenes in this movie were off great challenge. I was injured many times, and yet, we were able to complete them without any compromises. We all believe that the movie will be very well received. Director Hari sir has stepped out of his routine pattern, and has attempted something unique and different. Everyone involved in this project extended their complete support. This film will easily attract and impress everyone. There were a few scenes where I was emotionally inclined to my character. The film has lots of comedy and entertainment elements. Hari sir is a strict master, and his dedication is very unconditional. His energy kept spreading positive vibes on the sets. We have shot the movie across various locations. I thank the cinematographer for capturing the visuals in an elegant manner. This is the first time I am working with GV Prakash sir, and I thank all the technicians who have worked in this movie.”

“Director Hari sir is the main reason behind completing such a grand and big movie in a short span of time. His vigorousness left everyone awestricken. I thank Arun Vijay sir for making me a part of this movie. Cinematographer has very well been coherent to the working pace of Hari sir. It’s been an honour and privilege to work with the ace artistes like Radhika madam and Aishwarya madam. It was a great learning experience to see Samuthirakani, Thalaivasal Vijay. I am a great fan of GV Prakash music. I thank the team responsible for my makeup and stylist. This will be completely different from Hari sir’s previous movies, and it is going to be an emotional family entertainer. I request everyone to support this movie.”

“Working with director Hari has been a long run desire, and this movie ‘Yaanai’ has fulfilled it. He has always been a producer friendly director. I thank the entire cast and crew for completing this movie smoothly without any issues.”

“This is the first time I am working with director Hari sir, and with this, my long run dream come true. Producer has been the main reason behind this collaboration, and I extend my heartiest thanks for his lovely gesture. Working in this movie has been a wonderful experience. I request everyone to support this movie.”

“Hari movies always have sentimental factors, and this one is not going to be an exception. It’s been a great experience working with Arun Vijay, Samuthirakani and others. This will be a movie catering to the tastes of audiences across all age groups.”

“The film has established me in a new-dimensional character. It is going to be a greater milestone for Arun Vijay. Yaanai will be a great entertaining movie to release after the corona lockdown. I thank and wish great success for the entire team and technicians, who have worked in this movie.”

“It’s a bliss and gleefulness to be working with a great director like Hari sir. He imparted lots of interesting lessons in acting. I have learnt a lot, working in this movie. I am happy for having worked with Arun Vijay sir. He faced many challenges during the shoot, and successfully completed it. Although he was deeply injured during the shoot of action sequences, he was punctually present for the next day shoot without taking any break. I am confident that the movie will earn him a great success.”

“This will be a great milestone in the career of Arun Vijay. One of the best scenes he has performed is a single shot action sequence for 3 minutes 30 seconds. This will be definitely appreciated by everyone after the film’s release. I thank Arun Vijay and director Hari for giving me an opportunity to be a part of this movie.”

“The entire star-cast majorly comprised of senior actors. It was a great experience working with them. Working with director Hari sir and Arun Vijay sir has been an unforgettable experience. I request everyone to support this movie.”

Anirudh spreads out ‘Rap’ mania with Ghibran for “Sixer”