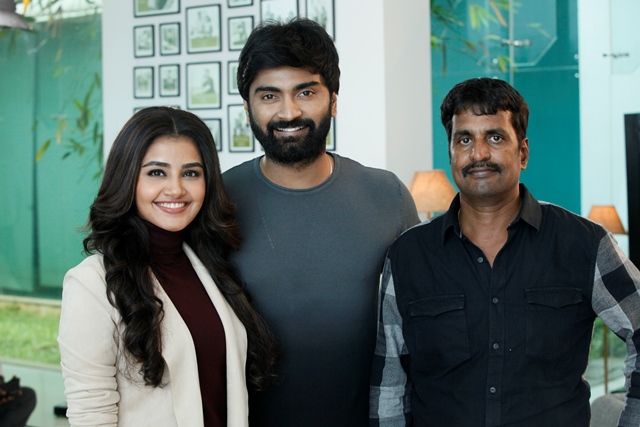 Atharvaa Murali-Anupama Parameswaran starrer “Production No.3” directed and produced by R. Kannan in association with M.K.R.P Productions is now on the verge of completing the shoot. The crew will be flying down to Azerbaijan for a 15-day schedule.

Director Kannan says, “We are currently shooting across a huge set work of house erected in OMR. Following this, we will be heading to Azerbaijan for a 15-day schedule with which the entire shoot comes to an end.” Opining about the way, the film has shaped up, Kannan adds, “This entire project has been a different experience for me and Atharvaa. Both of us have been involved in action and thriller genres respectively in the recent years. Personally, I wanted to come back to the zone of feel-good love story from where I actually embarked on my directorial journey. In fact, working on this film has been a rejuvenating experience and it’s same for Atharvaa, who has been indulged in racy thrillers. This film will be more refreshing and entertaining as my erstwhile movies like Kanden Kadhalai. I am sure, this film will offer a delightful experience to the family audiences and we will be soon releasing the first look.”

Robert Donwney Jr’s Dolittle remake is all set to release...