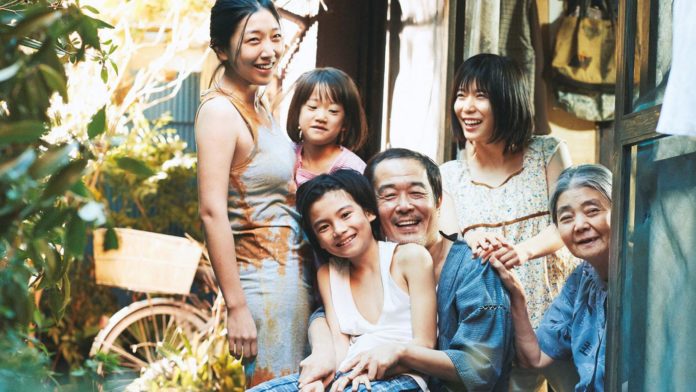 Shoplifting is a regular menace for big shopping outlets as well as departmental stores wide across the length & breadth of the globe. Japan is no exception! Based on some real life incidents & inspired by reports on poverty and shoplifting in Japan, Hirokazu Kore-eda has written the screenplay conceptualizing scenes & sequences while contemplating the screenplay set around a family of shoplifters! He has also edited & directed the film. The narration unfolds around a family that thrives wholesomely on shoplifting while struggling to face a life of poverty!

The film premiered at the Cannes Film Festival where it went on to win the Palme d’Or.

The script has been set in Tokyo against the backdrop of a family living in poverty. Osamu, a day laborer forced to leave his job after twisting his ankle; his wife Nobuyo, who works for an industrial laundry service. Aki works at a hostess club. Shota is a young boy.  Hatsue, an elderly woman who owns the home supports the group with her deceased husband’s pension.

Osamu and Shota routinely shoplift goods, using a system of hand signals to communicate. Osamu tells Shota it is fine to steal things that have not been sold, as they do not belong to anyone.

The family observes, Yuri, a neighborhood girl, locked out on an apartment balcony. They bring her to their home, intending to only have her stay for dinner, but choose not to return her after finding evidence of abuse.

Yuri bonds with her new family and is taught to shoplift by Osamu and Shota. Osamu urges Shota to see him as his father and Yuri as his sister, but Shota is reluctant to do so. The family learns on television that police are investigating Yuri’s disappearance; the family cuts her hair, burns her old clothes, and gives her a new name- Lin.

After a series of nail-biting moments of crime & compassion, Yuri returns to her birth parents who continue to neglect her. On the balcony, she is seen looking out over the city, expectantly!

Action Teaser I Vishal, Tamannaah I Hiphop Tamizha I Sundar.C