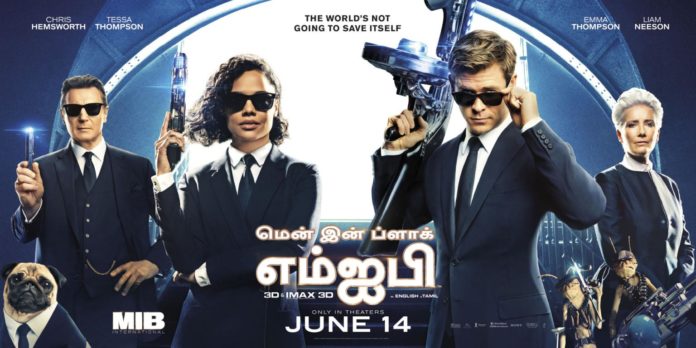 CURTAIN RAISER – Based on Malibu/Marvel comic book series The Men in Black by Lowell Cunningham, M.I.B. has now grown up into a series of science-fiction action comedy films with 3 outings so far-Men in Black (1997), Men in Black 2 (2002) & Men in Black 3 (2012)-all of which were defined by their creativity & inventiveness to blend comedy, science fiction & adventure. Men in Black-is a government agency started to establish contact with beings not of our world. While Barry Sonnenfeld had helmed the 1st 3 films, this 4th instalment which is a spin off from the series has been directed by F. Gary Gray. The film, which has its theme built upon the idea that aliens from other worlds  are living among us, has been shot in locations at New York City, Morocco, London & Italy.

SYNOPSIS – Agent H (Chris Hemsworth, popular as Thor in Avengers: Infinity War!), a top agent in MIB’s UK branch headed by High T (Liam Neeson, acted in over 70 films!). Agent M (Tessa Thompson, a critically acclaimed actress!) is, a new MIB recruit assigned to the UK branch. Agent H & Agent M team up to render their services to probe into a series of alien attacks that send them traveling around the globe! Emma Thompson (an Academy Award winning actress who was also seen in MIB 3!) returns as Agent O, the head of MIB’s US branch. Owing to the force of circumstances, Agent H & Agent M resort to the use of high-tech weaponry to battle mischievous aliens on Earth.

One of the MIB’s signature instruments is the pen-like Neuralyzer, which by isolating electronic impulses in the brain of a target or witness, wipes their memory, putting them under a hypnotic state and susceptible to the implantation of false memories. It helps keep the agency’s existence and the presence of aliens on Earth unknown to the public.